Make This One Commitment and Your Golf Game Will Flourish

You don’t need to stick around a golf course for long to see a golfer who is visibly suffering through their round. They mope around from one shot to the next, drop a few expletives, and maybe toss a club in anger.

Even the pros do it… 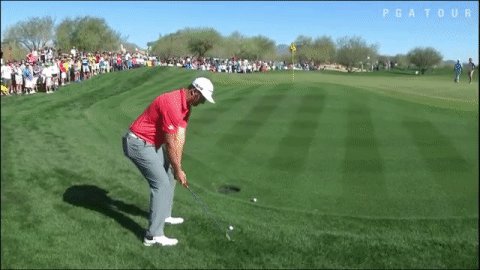 All of us can partially sympathize with this player because we have been in their situation at some point.

When you take a step back and think about it, it’s hard to imagine why anyone would pay considerable money to spend 4-6 hours in a state of constant disappointment and emotional distress!

However, anyone who is absolutely hooked on this game can’t help but come back for more torture because we know golf has become part of our DNA.

I am here to tell you that it doesn’t have to be that way. While it might not feel that way, this game is a leisurely pursuit for almost all of us. If we can’t have fun doing it, then why should we even bother?

On top of that, I can guarantee you that an overwhelmingly negative attitude on the course will prevent you from playing your best golf.

I Hated Golf for a While

One of the reasons I started Practical Golf is because I know exactly what all of you are going through. This game means something to me just like it does to you.

My relationship with golf has changed many times over the past 25 years. It went from a childhood passion to a competitive obsession, which resulted in several years of mostly misery.

In short, my expectations got completely out of control. I was a pretty good player as a teenager, and then the amount of time I was able to spend on the course greatly diminished. I stopped competing after my first year in college and mostly focused on academics and all of the other things kids do at school. Then I got abruptly introduced to the real world when I graduated.

I would play maybe 8-10 rounds a year, and all of them were mostly a disaster. I expected to shoot the same scores I could as a teenager without putting in the work. At the first sign of a mistake, my temper would flare up and the round would generally be ruined. Overall, my attitude towards golf was dreadful and playing wasn’t much fun.

I Don’t Deserve to Play Well

It became abundantly clear that I needed to change something, or else I couldn’t play golf. It took a little bit of budding maturity as a young adult to realize that I simply did not deserve to play at the level I was accustomed to. My practice time was limited since I lived in New York City, and it wasn’t a reasonable expectation to shoot lower scores without practicing and playing enough.

So I made a pact with myself – my goal was simply to enjoy whatever time I could spend on the course no matter how well, or poorly I played. It was actually quite liberating. I was able to accept the fact that I was not going to have any drastic improvements or return to my prior form. I was just out there to have a good time (what a crazy concept!!)

Interestingly enough, my scores did improve.

The Promised Land (for me at least)

Just over four years ago, my wife and I decided to move out to the suburbs when our son was born. Coincidentally, we moved 90 seconds away from a golf course.

As you can imagine I was excited – for the first time in almost 12 years I was going to be able to play and practice more often.

With my new approach to the game, it quickly became the most rewarding time on the course I had ever spent. I was putting the right kind of work in on my game, having fun with new golf buddies, and starting to see meaningful changes on the course.

For the first time, my expectations of myself were lining up with my capabilities and preparation. While it took more than two decades to realize this, I found true golfing bliss once this occurred.

While I place enjoyment first these days, the interesting side effect is that I am a far better player now than I ever was.

What Can You Learn?

Generally, I don’t like to talk about my own game on this site too much for fear of boring all of you. But I do think there are a few things you can learn from my journey to and from the golfing abyss.

I truly believe that human happiness is mostly correlated with properly managing expectations. This pertains to golf, marriage, work, friendship…everything.

I’ve met golfers who can’t break 100 who are happier than can be. I’ve also seen players shooting level par who want to tear their hair out.

The difference between the two is that one player has the right perspective while the other has probably lost it. So which one will you choose?

There is no right version of golfing happiness for everyone. For me, I love the pursuit of getting better. I want to put the work in, and compete with myself and others out on the course. Yours can be completely different. Golf could be a way to walk 6-7 miles while spending time outdoors with friends – you’ll just stop here and there to knock a little white ball around in between.

That’s the beauty of this game, there is no one right way to play golf or enjoy it.

Here’s what I can tell you about your attitude towards the game, and the kinds of results you can expect. They are mostly correlated. If you can commit to playing this game for enjoyment first, I can pretty much guarantee you that your play will improve. That’s not to say practice and all of the other stuff I talk about on this site are not important – they are.

So if there is one thing you are looking to really improve upon this year, consider making a commitment to yourself that golf is going to be fun above everything else. I can tell you from personal experience this can make all of the difference.